Virtus Segafredo Bologna began the new season with a win in the new arena. NUSSLI constructed the temporary indoor arena at Padiglione 30 in the convention center of Bologna. Featuring nearly 9000 seats, it is one of the biggest basketball arenas in Italy.

On November 10th, the Virtus Bologna basketball team played the opening game in the new temporary home venue called "Virtus Segafredo Arena". The current Champions League champions defeated Treviso Basket with 84:79. This is surely a great sign, not only for the seasons of the team from Bologna, but for the arena project as well. The team is treading new paths with its new indoor arena. Fully in line with the wishes of the many basketball fans, the project initiated by Virtus Bologna together with the Bologna Fiere trade fair creates more audience seats first and foremost. Almost twice as many fans can now experience the season games of their team up close in the Virtus Segafredo Arena.

Totaling roughly 9,000 spaces in the various seating and standing room categories, the indoor arena offers basketball lovers a unique sports experience. Business events can be also hosted in the hospitality zone by booking one of several attractive packages. From the press area, members of the press enjoy a great view of the court as well as the necessary working environment for live reporting from the arena. 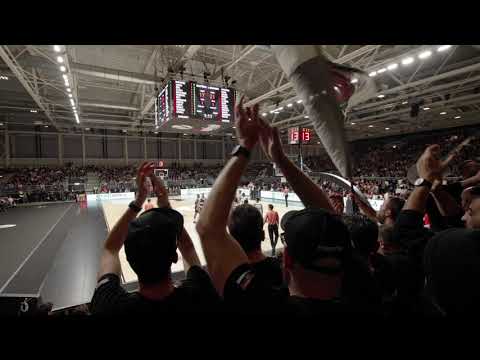