FIFA chose to bring global football to the Middle East by selecting Qatar as the region's first FIFA World Cup™ host. The Education City Stadium will host several group matches and is a proposed quarterfinal venue for the tournament. NUSSLI provided design and build services for full-bowl demountable grandstands in the upper tiers of the stadium. In less than 250 days, a demountable tier system supporting 16,500 seats was installed under challenging conditions.

Directly after the contract was signed, the six-month planning phase for the demountable tiers commenced. Thanks to the legacy-thinking of the Supreme Committee for Delivery & Legacy (SC) and the forward-thinking modular design of the arena, its capacity will be reduced from 40,000 to 20,000 following the FIFA World Cup 2022™. The tiers and seats, once removed will be re-purposed to create sporting venues/facilities in developing countries.

This legacy plan will not only aid social, football and infrastructure development abroad – it will also leave Education City with a venue suited to the needs of its growing population of students, faculty, and staff. After 2022, the local, regional and international sporting fixtures being hosted here will attract smaller crowds than FIFA World Cup™ games. Reducing the capacity will ensure that the arena attracts a full house and keeps its energetic atmosphere, with the demountable tiers being replaced on the upper terraces with gymnasium space, running tracks and other facilities.

The very dynamic construction environment made the project very challenging. Parallel works from various international companies required an extensive coordination. With support of 3D planning tools bottlenecks were identified at an early stage. That included sequencing of necessary elements around the cable net roof installation and the grandstand tiers actually forming a necessary component for the roof cables to be laid upon to allow the lifting of the tension ring supporting the roof.

Extensive design coordination with the mechanical and electrical specialist was required over a number of months to facilitate the bespoke air-conditioning system, providing cooling to each individual seat. The terraces of the system installed were entirely bespoke to meet project and stadium specific performance criteria and constraints, such as the stadium bowl geometry and load requirements. The tiers had to form a closed system to act as a plenum for the cooling and the entire system had to be demountable.

Works were carefully coordinated with the base-build stadium works, up to 60 NUSSLI personnel worked in teams across the upper tier of the stadium to build the fully clad demountable grandstand, housing 16,500 seats, and including media boxes and glass balustrades. Considerable access and logistical constraints had to be contended with in addition to the extreme local climate, which required portions of the works to be undertaken during night shifts.

Design implementation, production and assembly took place simultaneously and resulted in a project execution of less than 250 days. At the beginning of November 2019 the project was successfully handed over to the client. 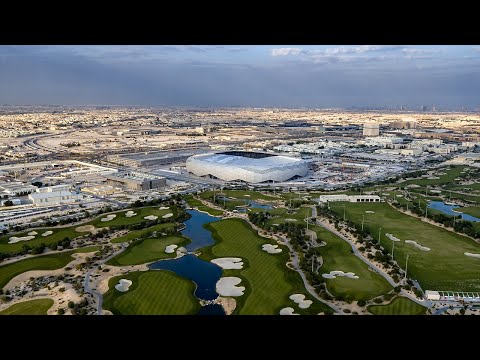