The Hahnenkamm Race in Kitzbühel

Today, the ski racers begin the Hahnenkamm Race with the Super-G. The famous Hahnenkamm Race has been part of the FIS Alpine Ski World Cup since 1931. NUSSLI has once again provided the necessary grandstands and other temporary event structures for the finishing slope at this year’s event.

The team installed two grandstands with a total of 3,500 seats along the finish line and additional platform spaces for VIP lounges entirely by hand. Walkways, several platforms for the catering company, and sanitation facilities were integrated into the substructures of the grandstands. To accommodate the media and provide the necessary event technology, NUSSLI set up several podiums and camera towers along the slopes and assembled substructures for video walls. Most of the camera towers were flown to their respective assembly sites by helicopter.

The first material deliveries for the camera towers and platforms arrived as early as last November to be assembled on a golf course. The use of forklifts or cranes was forbidden on the course, which meant that the 220 tons of material had to be transported from a distant parking lot to the actual construction site using slope maintenance machinery.

The famous Hahnenkamm Race is held each year at Kitzbühel’s home mountain, the Hahnenkamm.

The downhill race and the Super-G from the Streif and the slalom down the Ganslernhang have been fixtures of the event since its early years.

For the first time a 360° camera recorded the track. Have a look. © Copyright, Hitradio Ö3 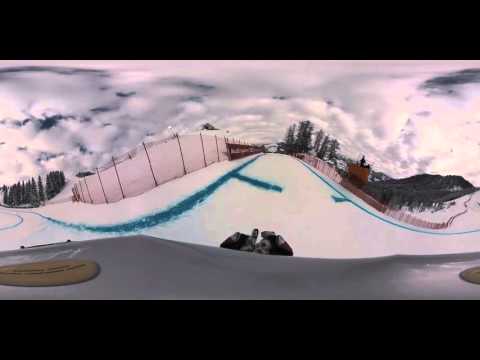