Starting in July, visitors to the National Building Museum in Washington can look forward to a temporary interactive exhibition. The international event and exhibition stand constructor NUSSLI will be supporting the project team with its technical expertise.

The exhibition with the name "Hive" was designed by Studio Gang. The main elements are three dome-shaped installations that are connected to each other. They consist of over 2,700 cardboard rolls of various sizes. The largest dome measures almost 18 meters in height and has an opening at its very top measuring approximately three meters. With its technical expertise in temporary construction, NUSSLI is contributing to allowing the idea to be taken from paper and realized in reality.

The cardboard rolls are silver on the outside and magenta on the inside. In the classic environment of the National Building Museum, this stark color combination creates a spectacular visual contrast.

“When you enter the Great Hall you almost feel like you’re in an outside space because of the distance sound travels before it is reflected back and made audible,” said Studio Gang founding principal Jeanne Gang. “We’ve designed a series of chambers shaped by sound that are ideally suited for intimate conversations and gatherings as well as performances and acoustic experimentation. Using wound paper tubes, a common building material with unique sonic properties, and interlocking them to form a catenary dome, we create a hive for these activities, bringing people together to explore and engage the senses.”

The progress of the construction can be followed via webcam.: http://www.workzonecam.com/projects/nationalbuilding/canstruction/workzonecam 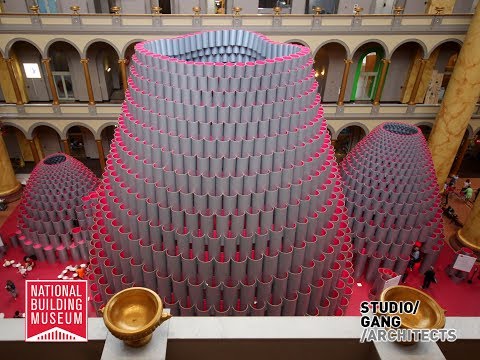